On Sunday Jan 28th, 2012, forty two young women aged 14-18 gathered together from all across southern Ontario in a hotel ballroom twenty minutes north of Toronto to begin an exciting quest. On that day of discovery, the 2012 Search for Miss Teen Canada – World, Ontario Regional event was held at the Sheraton Center Hotel in Richmond Hill. The day dawned cold and wet and grew steadily worse all afternoon; the evening performance coincided with the first heavy snowfall of the year, but nobody was going to let a little snow get in the way—as they say, the show must go on.

When the SMOJOE crew arrived, the snow was just starting to fall. By time my assistant Lauren and I parked the car under the hotel (free parking!) at 4pm, it was a full scale blizzard outside with whiteout conditions on all roads leading to the hotel. We stepped out of the storm and into the warm light of golden metal wall sconces on cream coloured marble walls over plush red carpets. In the Sheraton’s elegant conference hall mezzanine there were several teens, their hair all done up in curls, wearing evening gowns and high heels… We knew we were in the right place. Our appearance preceded the dress rehearsal of the night’s big show by a little under an hour; our pictures show the excitement in the final preparations for the first curtain call. 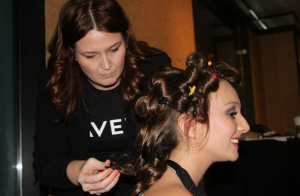 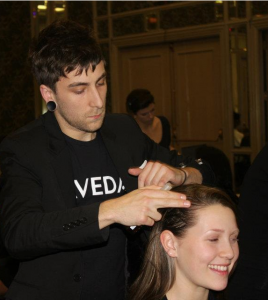 just a few of the AVEDA Pro Hair Styling Team

The whole Pro Hair Styling team from the prestigious AVEDA Institute really became part of the experience that afternoon. Scattered about the hallways were pockets of beauty tucked here and there with young ladies hastily trying to get themselves ready for the evening performance. While most of the preparations happened inside the large backstage area behind the main ballroom, some of the girls were spotted nestled into their own private corners and enclaves being primped and styled by tag teams of professional make up and Hair Stylists courtesy of AVEDA Team Canada and the AVEDA Institute here in Toronto. Sean Cuffie, along with the sound and lighting crew setting up for the big show...

Behind the curtain, I found Shawn Cuffie, the Choreographer (more on Shawn later), the Lighting Director and the Technical Director at work tweaking all elements of the surprisingly complex and carefully composed stage show.
James Williams, an acclaimed stage dancer and Shawn Cuffie, the award winning Toronto choreographer have  been working tirelessly to work out the stage routines for the Miss Teenage Canada circuit and have been doing so for the last four years. Backstage at the Miss Teen Canada regional finals in Ontario

Backstage at the Ontario Regional competition (the official prelude to 2012 Search for Miss Teen Canada – World), the creative teams are taking a well deserved break after five solid hours of making beautiful hair and skin look like magic. In the center of the room, make-up was studiously being applied by trained professionals, while all around the perimeter were teams of top Canadian Hair Stylists from AVEDA Canada headed up by Creative Director Tristin Morrison and Brenda Longhurst. The AVEDA hair team was unbelievably talented. The transformations were spectacular and their professional expertise really showed.

The AVEDA hair team was hard at work for more than five hours. The transformations from small town girl next door to beauty pageant queen were stunning. Years of specialized training and experience really pays off.  Their professional expertise really stepped up to the plate and it showed in the smiling faces of each and every contestant. The girls looked amazing—the show was spectacular and they really did make dreams come true for so many girls that day. You can see more great pictures and read their own posts on the Aveda Institute Toronto Facebook Page and on the AVEDA Canada blog.

It was a great experience for everyone.

These events are important. Especially for the contestants and the students as AVEDA provided three or four of their top students an excellent mentorship opportunity to experience the glitz and glam of show business first hand right beside the A Team, long before they would ever get this kind of a chance. Its this kind of hands on mentorship experience that sets the AVEDA Institute apart from other hair schools in Canada, and another great reason to consider a career with AVEDA. Sophie Roe, recent graduate of the AVEDA Institute in Toronto

Speaking of top Hair Students—presented here is a photo of 22 yr old Sophie Roe, a recent graduate of the Aveda Institute hair school in Toronto. She was one of the lucky recent graduates who was called up and invited to join this elite team of her friends and classmates here at the Ontario regional finals event. She got the call while working at her day job in a cool and trendy hair salon and spa on Queen St E. in downtown Toronto. Thrilled to be invited to participate in this once in a lifetime event, Sophie worked her curling irons to the max preparing three individual teens with three very different looks.

At 7pm, with a massive lineup of family, friends, and supporters itching to get in and see their favourite girl up on stage, the doors opened. The adoring fans began streamed in, programs in hand, hearts pounding as they sought the best seats. The lights went dark, the music began, and one by one, 42 girls marched up on stage in all their star studded glory. Awesome.

It was a fantastic event and a fabulous show. Check back here for the full scoop. Until then, a big congratulations must go out to all the contestants and creative teams for giving it everything they had. It was nothing short of spectacular.

While on the topic of Professional Hair Styling…

If you ever considered becoming a professional hairstylist, working at a top Salon in Canada, working on editorial shoots for the world’s biggest fashion magazines or doing hair and makeup for the biggest television shows, commercials and Hollywood movies, you owe it to yourself to check out the AVEDA Institute. It really is the best place to learn and grow and become a hair and beauty pro in Canada. As a matter of fact, there could not be a better time to consider a career in the beauty industry.

This world famous AVEDA Institute is holding a Scholarship Contest from now until March 31st. If you or someone you know was born to style, AVEDA has generously offered up five free scholarships – one to each of five top hair schools in Canada. There is one scholarship available for each of Toronto, Winnipeg, Calgary, Vancouver and Victoria. The Aveda Institute hair school scholarship video contest is a very big deal and winning it could change your life. The finalists will be selected by a panel of celebrity judges in each city. Contestants will be selected based on the compelling nature of their presentation as well as the content and quality of their submitted videos. This challenge ends March 31st, 2012 so get started today.

The 17 other finalists in no particular order are….