When we are free of depression, anxiety, excessive stress and worry, addictions, and other psychological problems, we are more able to live our lives to the fullest.

Peace of mind is a natural condition, and is available to everyone.

.Mental health strengthens and supports our ability to:

Each year from   May 2-8th  is Mental health awareness week. Being a Mental health ambassador in  central Alberta and knowing the personal struggles of fighting a mental illness this is a topic that is very close to my  heart and a subject I believe is  vital to educated upon in schools Canada wide. With all the hustle and bustle of everyday life its hard to look after are mental well being and ask ourselves “are we doing ok”, During this annual week every May, people of all ages are encouraged to learn, talk, reflect and engage with all others on all issues relating around mental health without the fear of being judged by their peers   The Canadian Mental Health Association has a great list of resources to explore. You can also visit the Alberta Education website for even  more information and resources associated with mental health.

I am Totally in love with these big statement hats!! Whats better then wearing them for a great cause! Thank You Leigha Graf from the Honor Studio for the great photo

During this special week is  Hats On! For Mental Health day on Wednesday,May 4. On this day, the Alberta Teachers’ Association, the Canadian Mental Health Association and Global TV were asking schools to relax their hat rules and encourage both students and staff to show support for mental health awareness by wearing a hat to school on this day.  Did you post a selfie with your favorite Hat and show your Support??

Being an active member of my high school’s student council, I had the wonderful chance to help shine even more light onto this ever important subject Besides from “hats on” the week was filled with 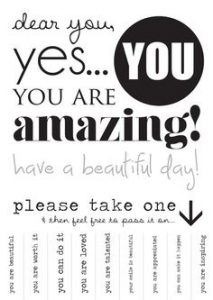 mental health centered games, guest speakers and activities each noon hour, with fast facts ( as can be seen below) said on the morning announcements and broadcasted on the school television’s, My favorite though being “take one as you need” posters hanging all over the school, encouraging all students to embrace the idea that they are amazing and loved no matter what.  Such as fun week of learning and self- discovery for all.

How common is it?

What is the economic cost?

How does it impact youth?

I hope this gave you some helpful information and encouraged you all to engage your school in the next Mental Health Awareness Week!!