I remember waiting to go on stage for the opening number and just thinking in the back of my mind “In a couple of hours, one of us, their life is going to change forever”. At that moment, I did not think it was going to be me! 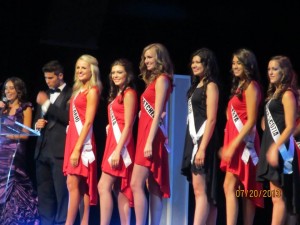 While they were announcing top 20, I remember my smile was shaking I was so nervous. It was a sigh of relief when my number was called and I was thankful I got to stand beside my best friend up there, exactly as we had hoped. The top 20 competition was swimwear. I felt as though I had slightly stumbled coming down the stairs and just prayed that it wasn’t noticable. My goal was to make it to the top 20 so I was thankful that I made it that far and I knew that no matter what happened when the top 10 was called that making it any farther would just be a blessing.

Top 10 was called and my number was called closer to the end. I couldn’t even tell you who else was in top 10 with me because I was so focused on hearing my number, just in case by some small chance it was called. Once it was, it was another huge sigh of relief and I just remember clapping for the other contestants and trying my best to stay focused and not completely freak out.The top 10 competition was evening gown. I felt very confident in my evening gown run and just hoped it was enough for the top 5. I just kept reminding myself that making it this far was a blessing and making it any farther would just be even more of a blessing.

I was the last number called for top 5. I don’t think I was breathing. I just remember staring at the empty spot on stage hoping that I would get to fill it. Such a surge of emotions came over me after my number was called. I remember walking back stage and just wanting to cry. No reason in particular but just cry. All the other girls were lined up backstage as well waiting to go on for final 5. A lot of them were amazing and telling me such encouraging things. It meant so much that even though they couldn’t be standing up there with me, that they were behind me all the way. The top 5 competition was a question. My question was “What is your future ambition?”. I just answered it as honestly as I could.  I know I slightly stumbled over my words but as with every other part of the night, I hoped it was good enough.

The special awards were awarded next. I was very excited for all the winners and felt they were truly deserving of their awards. I ended up with Top Photogenic which I was not expecting at all! I honestly thought I didn’t have a shot at the crown after I won that title. Next they started to announce the placement of the top 5. I was waiting to hear my name for every runner up. Then it was down to final two. I couldn’t think. I didn’t care at that point if I had won or not, I just wanted to know! I remember wanting to kill Luke and Gina who decided to 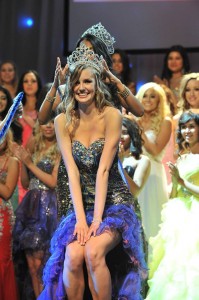 take a selfie I think before actually announcing it. I don’t think I could hear anything they were saying the thoughts in my head were so loud. Then it happened. “1st runner up, Mackenzie White and your new Miss Teenage Canada 2013 is Jillian Martin!” I couldn’t believe it. I did it! That’s all I could think about was that out of 65 girls, I did it I won.

I am so thankful and I feel so blessed. That’s the only way I can describe it.

Thank you to my family and friends for supporting me from the beginning, to the judges for making this a reality, to Michelle and MTC-W Inc for making this all possible, to all those involved over the pageant week for making it a fantastic experience, to all the sponsors who’s generousity did not go unnoticed and to all the other contestants, I love you all, it was an amazing week and I am so glad I got to spend it with you guys. You are all incredible young women who I know will go far in life wherever the road may take you. 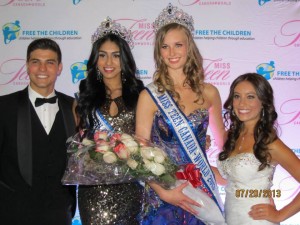