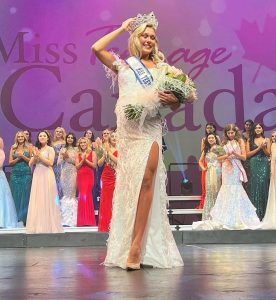 Aalanna is an honour student, receiving the highest academic, athletic and french awards and the highest personal fitness awards. Her accolades also include, receiving the 150 Canada medal awarded by former MP Diane Finley, provincial silver medalist for public speaking, qualified for skating provincials 4 times, she was a torch bearer for the Canadian Winter Games, is a current record holder of 5 consecutive wins for cross country, and a top 3 medalist for track and field for 5 consecutive years!

Aalanna creates goals & sets very high standards for herself, academically, athletically and in all other aspects of her life. She hopes to attend schools all across the nation to
speak about her platform of overall mental wellness and self-love. In the future, she plans to attend Western University, take an undergrad in criminology, later advance to law school and become a lawyer.