“What doesn’t kill you makes you stronger”

In the past few months I have had the privilege to speak to students at a few schools. I did not want to simply walk into a school and start talking about something either boring or that they have already heard before, so I looked to speak to the students about a “hot topic” that was currently an issue at their school. On that note, the main topics focused on were Bullying as well as Self Esteem in young women.

Bullying is clearly a major issue today. For years it has affected a wide age range of individuals and many organizations are dedicated to putting a stop to it. It can come in many different forms, from Cyber-bullying to the classic “Mean Girls” perception to physical abuse. Sometimes, bullying isn’t very obvious either. For example, when girl’s pick on one another, they exploit the weakness’ and insecurities of one another and just by

The classic view of a bullying in a girl’s world

using words, use it to hurt the feelings of another one. The reality is, every single person is involved in bullying one way or another. To show this to a group, I asked the following:

By that point, nearly every single person’s hand in the room has ben raised.

Just like many others, I was bullied in middle school. The first time I was bullied, I could never find the reason as to why.  I used to be a really shy and introverted student. I was scared to talk to many people on my own, let alone stand up for myself when my bullies picked on me or decided to take my food at lunch and throw it in the garbage simply because they believed it smelled funny (it was just fish!). Eventually, I told my mom and ran away from my problem. I transferred to a different school thinking I would never have to deal with it again. At my new school, I was having an amazing time with all of my brand new friends. About a year and a half later, something changed. It started with my friends ignoring me, then I began receiving mean messaged over ‘MSN messenger’ (yes, the dinosaur age of Facebook Chat).  Some of which read “no one likes you anywhere”, “you are so ugly” and “why don’t you do the world a favor and just [leave] already”. You get the hint…

It hurt SO much, especially when I was sick enough to miss the final three weeks of school. All of those painful that I thought I had escaped came rushing back into my life and it felt as though there nothing could be done to stop it. I will not get into the details of every time 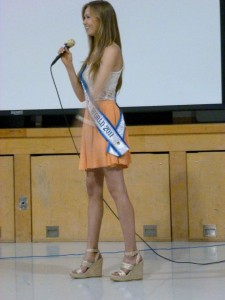 someone said something mean, but the point is how I felt. I felt alone, hurt, betrayed and unimportant. At the time, I thought that no one else could understand how I felt because they were all so happy.  This became a very difficult point in my life.

Ironically, that summer I had tried to call one of my friends but I called one of the bullies by accident because I previously had her phone number memorized. There was so answer, so I left a voicemail that went something like this: “Hey girl! Are we on for lunch this weekend? Talk to you soon!”. A few hours later, she called me back agreeing to meet for lunch. This mistake was the best thing that could have happened. We talked for a while and I found out something very interesting. People starting being mean to me because they had heard a rumor that I had saying bad things about them (follow that? Haha). Essentially, all it took was one girl to spread these rumors among my friends to ruin my relationship with them, and the rest you can guess wasn’t very fun. Rather than finding me and asking for the truth, my friends had believed it. There were also only a few people who had accessed many different people’s accounts to send me the hurtful messages, which I clearly never knew at the time. It was a tough time, and I know many people have been through much worse, but I have to thank my family and a few really good friends that I trust for helping me get through such a tough time. If it weren’t for them, I know that I would not be where I am today.

The biggest piece of advice that I would love for anyone reading this to take away would be that communication is key! If you hear a rumor, that doesn’t mean that it is necessarily true,. Ask the source of the rumor directly if it is true. This can avoid a very large, disastrous mess! If it is about yourself and it doesn’t bother you much, let it roll off your shoulders because you will never be able to impress every single person on the planet (that would probably get a little boring after a while). If you hear a rumor being spread about someone else that you know is not true, speak up and extinguish the flame right then and there. Lastly, don’t be afraid to talk to your teachers. They don’t just eat, live and breathe at school to give you homework, they genuinely care about you and your wellbeing!

To those of you currently being bullied, I promise you, it does get better!!! Frankly, I thank the people who bullied me because it made me into the stronger, more outgoing person that I am today. Without them, I never would have had the confidence to win this pageant.

There is a fabulous anti-bullying campaign called the “I Will Make It Better” Project run by an even more amazing boy, and my friend, Jacques St. Pierre. His passion to stop bullying even caught the attention of Lady Gaga (check it out below)!!

Oh yeah and that girl that I happened to phone by accident, after talking everything over, she became one of my best friends to this day.

Thank you very much to Rosethorn Junior School, Munden Park Public School and Kensal Park Secondary School for allowing me the pleasure to come speak to such amazing students!

Lauren is a gracious, outgoing eighteen year old with a 95% average who plans to study Biochemical Engineering at University. In addition to her High School Diploma, she has received her UCAPE Diploma, the Global Leadership Diploma and the Gold Duke of Edinburgh Award and she is fluent in French and English. Being passionate about athletics, she was captain of her Varsity field hockey team and played with Team Ontario. Lauren loves to spend time with those who have special needs. She has natural affinity for travel and exploration, where she strives to learn about different cultures throughout the world. Lauren has also participated in two service projects, taking her to Ghana and Peru. She loves to run, snowboard, kick-box, scuba dive and surf at every given opportunity. Lauren is currently working on a documentary to raise awareness that perfectly good wasted food can be donated to those in need.
View all posts by Lauren_Howe →
This entry was posted in Family, official blog and tagged Bullying, I Will Make It Better Project, Jacques St. Pierre, Lady Gaga, Schools, Speaking. Bookmark the permalink.