Through my incredible opportunity to speak at Free The Children’s We Day, I had the privilege to meet the very inspiring Spencer West – one of the many remarkable individuals at the event. 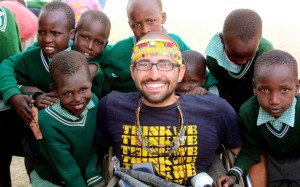 Spencer West in the yellow headband and the big smile

Spencer is not only a humbled, kind and hilarious guy, but he also has an amazing life story that he has shared with thousands of people across the world. Since I cannot do him justice, I encourage you to check out him telling his own story; http://www.youtube.com/watch?v=yjy2YNADXR4

Spencer will be climbing Mt. Kilimanjaro this June to raise funds for clean water projects in Kenya. Despite the difficult journey on it’s own, Spencer takes this challenge to a whole new level. You see, as a child, Spencer lost both his legs and was told he would never walk again. This certainly didn’t stop him from being a cheerleader in high school, pursuing other passions in his life and now tackling the largest mountain in Africa. The campaign is called “Redefine Possible” . His journey will begin on June 12, 2012 and it will be documented on that very website.  The goal is to raise $750,000 to provide these clean water sustainable sources to approximately 12,500 people in Kenyan communities. If you choose to get involved, it is $10 to sponsor a step.

Good Luck Spencer! We are all cheering you on!

Lauren is a gracious, outgoing eighteen year old with a 95% average who plans to study Biochemical Engineering at University. In addition to her High School Diploma, she has received her UCAPE Diploma, the Global Leadership Diploma and the Gold Duke of Edinburgh Award and she is fluent in French and English. Being passionate about athletics, she was captain of her Varsity field hockey team and played with Team Ontario. Lauren loves to spend time with those who have special needs. She has natural affinity for travel and exploration, where she strives to learn about different cultures throughout the world. Lauren has also participated in two service projects, taking her to Ghana and Peru. She loves to run, snowboard, kick-box, scuba dive and surf at every given opportunity. Lauren is currently working on a documentary to raise awareness that perfectly good wasted food can be donated to those in need.
View all posts by Lauren Howe →
This entry was posted in official blog and tagged Free The Children, Redefine Possible, Spencer West. Bookmark the permalink.